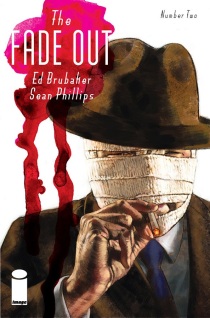 The Fade Out #2 (Image) – I’m very happy for Ed Brubaker and Sean Phillips on the success of the sold-out first issue and that others have taken a huge liking to the series. However, for me, I mentioned it with the first issue and now with #2 it’s hit me hard: my number one problem with this book is the third-person narration employed by writer Brubaker. It’s just too distant and contains too much telling. There’s a reason that overly exposition-y style is not en vogue anymore (unless you’re Chris Claremont, Neil Gaiman or Todd McFarlane). For the better part of two decades comics have largely (and wisely) used first-person narration because in a visual medium it keeps the narrative intimate and grounded in character. Watch a movie with third-person voice-over narration and tell me that isn’t off-putting. Prose in a novel is one thing, but if I can see the character(s) then I want them to tell me their story, not an outside/invisible narrator. In contrast, I think the first-person narration is at least a third (or maybe more) of what makes Velvet (Brubaker’s other hit Image series, and a lauded Fetish Favorite here) such a great read.

But, hey, I get it. Brubaker has been a prose writer “masquerading” as a comic book and film script writer for nearly two decades. That’s obvious to those who’ve been reading his work all these years. This man truly should be writing crime novels. A seasoned reader would inherently know that usually what’s contained in those third-person narrative captions is often stuff the reader can (or could) make out on their own if they’re paying attention and using active reasoning. Also, distant narrative doesn’t help matters when the characters aren’t exactly likable or sympathetic. Even in crime-noir stories they should be characters that are fascinating and make you want to root for them regardless if they’re completely irredeemable scumbags or not. Mainly, though, I just find the story and the characters facilitating the plot boring. In this issue’s backpages (its best pages, ironically), Bru admitted that The Fade Out (about the 1940s Hollywood) is his least commercial idea. To my dismay, I agree. — Rating: 2.5