This is a #workbook update on #ruckology by Brandon L. Rucker in which he reports on the productivity and counter-productivity of his author/musician life.

Not a whole lot to report in this working update because I’ve been busy living (more on that in tomorrow’s The Evening Muse). Let’s get right to it.

Project: CrimeTime (with artist Joshua S. Hooten) – Nearing the end of preliminary work and beginning actually scripting this week so that Joshua can start producing actual pages this coming weekend. The plan is to compose a breakdown of the plot Sunday, and then actually script out the page-by-page plot beginning Monday. That is what I will present to Joshua as his guide from which to illustrate his story pages, a method known as the “Marvel Method” which was pioneered by the great and legendary Stan Lee as a necessary means of expedience because at the time in the 50s and 60s he was the editor-in-chief as well as the head writer, charged with the task of providing multiple scripts in short order to multiple working freelance artists who needed the work in order to maintain a steady income. Of course I only WISH I could be in that same situation with a cadre of artists clamoring for the opportunity to illustrate my stories. Dream on.

Alas, I’m using this method, in lieu of the “full script” method (which does panel-by-panel directions) for a couple of reasons. One: I want a more flexible means of composing the dialogue that a full script does not really allow. Two: in the spirit of ultimate collaboration, I want to give Joshua plenty of creative space with which to compose his pages. This is our baby, and if I am the father of it, then that means he is its mother, doing the heavy lifting and giving graphic, physical birth to it. This project does not become a fully formed comic book or graphic novel without his creativity, talent, skill and workman’s effort.

And now I present to you his most recent piece of digital art, even though it has nothing to do with our project. But who doesn’t like Conan the Barbarian? 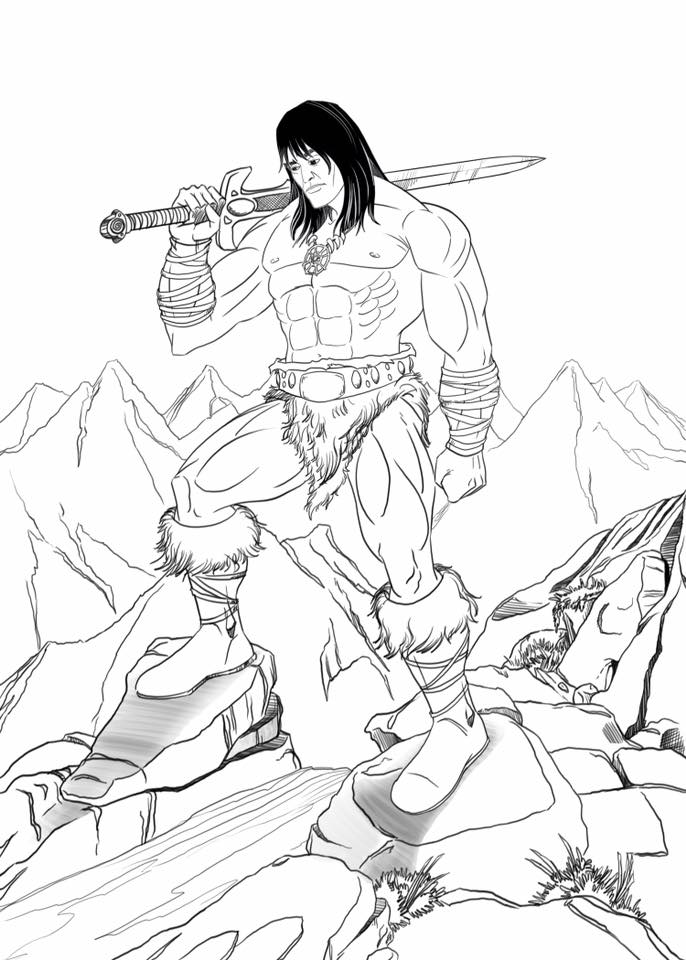 “Bro…. I cannot wait to have a story to start drawing. I don’t even know who this dude behind the stylus is anymore.”

See why I’ve cleared my calendar?

Since finally partnering up with my best friend and creative partner this summer to work on creating comics, prose is very much on the backburner while I focus on the comic. However, since I’m not writing in full-script format I will be able to keep my prose faculties somewhat in working condition as I use them to a certain extent in plot-style scriptwriting.

Whenever I do get to refocus my efforts on prose I will look to finish updating and completely revising the short story “All Things Considered” which has been begging to become a novella, at the very least. It could be that great mainstream American novel given its subject matter and themes, but I’m still probably not quite the author to pull that particular feat off just yet.

I’d really like to get to “The Monster Under the Bed” short horror story this Halloween season. It’s a creepy tale I conceived on my birthday last year that I should have written last October after I wrote up the synopsis.

Other than that, the novel series that’s codenamed Project: Blood-Borne still waits (im)patiently for me to return to it with umwaverimg commitment and a final decision on whether it’s going to be young adult, new adult or just general adult fiction. I’m pretty sure no other would-be novelist overthinks that kind of thing, right?

So my rock band Neglect the Alarm (more affectionately known as NTA) finally reconvened for practice this past week, after three months of inactivity. Hopefully we’re getting back into a groove of regular practices with the intent of expanding our roster of songs. We have a goal of achieving a total of a dozen completed songs by the end of the year. We’ve pretty much solidified Song #7, which we began before our break. And I think I may have the workings for what would become completed Song #8 with the three riffs I put together on Saturday.

Also, we absolutely must put the finishing touches on our 5-song demo EP that we recorded in December. Aside from the one and only show we played back in January, no one else on a public level has had the pleasure of hearing our music. That’s a damn shame.

So a few changes are afoot around here at #Ruckology. In July I fired off three Thinkbooks, my weekly download of brain juice leakage logs. Beginning this month I’ll be adding more new series. So coming real soon: Artbook, MusicBox and ComicsBox. A little later I may have Photobook, Tunebook, and Quotebook. They will all be self-evident once they’re up and going. Just keep an eye on the menu to the left to help ya with navigating this crazy blogsite. Tomorrow brings a new Evening Muse in which I gripe about the writer’s plight.

And that should wrap this up. I have a busy, busy August ahead so I expect to be broadcasting a rather robust Workbook edition in some thirty days as I get more hardcore into the business of writing and rocking.

Be good my people.