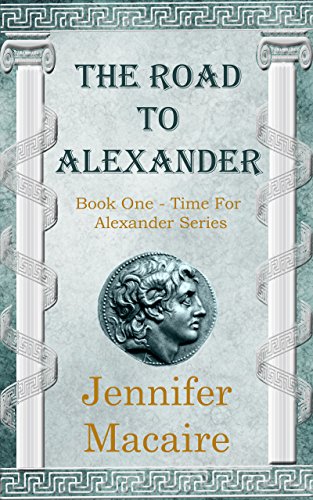 ~ The Road to Alexander ~

Alexander loved when I sang. He adored rock and roll songs, soft ballads, and opera arias. The music they played in Alexander’s time was heavy on percussion, strings, woodwinds and brass. Choruses were popular, and the music would give me shivers. It could be amazing, especially when all the trumpets blew together. I loved the sweet music of the harps and flutes and there were reed instruments, like oboes, included in every banquet. However, music was also an everyday thing, with the soldiers singing as they marched or worked. People sang as they went about their everyday business. And children were taught with songs, as I found out when Callisthenes came for my first lesson.

We had stopped for the night on the shores of the Caspian Sea. The wind was making the tent lean in a way that frightened me, but Alexander assured me there was no danger. I expected to be blown away any second, but the tent held. Callisthenes came by after dinner. I was lying on the bed, and Alexander was at his table going over the day’s journal with Ptolemy Lagos and Nearchus. Plexis was being treated by Usse – his collarbone still hurt – and I was playing a game of checkers with Axiom.

I was winning, for once, so I was cross when Alexander ordered Axiom to fold up the game, and told me to go sit in the corner with Callisthenes for my first lesson. I made a face, but obeyed. Besides, I was curious. What would I learn?

Callisthenes took a small harp out of his robes and proceeded to sing a very cute song about nine women called “muses” who lived on an island somewhere, and did all sorts of artistic things. Their names were lovely in themselves, and the song had three verses, with a chorus that went like this:

We are the muses, all standing in line,

We sing, dance, tell stories and give you stimulation

For all your artistic inspiration.

Well, it loses something in the translation. However, it was the first little song a child learned. It told him about the nine subjects he would study: epic poetry, history, lyric poetry and hymns, music, tragedy, mime, dance, comedy and astronomy. Those would be my lessons, and since each subject belonged to a muse, that’s where we started.

I went around humming about Clio and Calliope, Urania and all the other sisters until my next lesson.

The evenings were spent learning, but the days were spent walking. We marched around the shore, passing through many modest villages, all of which swore allegiance to Alexander. In each village he sacrificed a goat to the local gods, and met with the chieftain. It took us three days to reach the largest village on the shores of the sea, where we met the high chief of the Tapures, the tribe living in that region. The high chief laid down his arms without fighting, and Alexander rewarded him with the title of Satrap.

We traveled through his territory and then penetrated into the Hyrcania region, where we spent two weeks in Zadracarta, the capital. The people there, called the Madrians, submitted themselves to Alexander without a fight, and we were received with many banquets and feasts.

We stayed long for several reasons. Alexander was heading toward hostile territories. Bessus was still in front of us and was rallying the Bactrians against us. Alexander wanted to make sure of his allegiances, so he would never have to worry about being attacked from behind. It was his worst nightmare, the thing he worked the hardest to avoid. He would spend sleepless nights with his generals, working out the various things that could go wrong. He approached fighting exactly as if he were playing a gigantic chess game. He had to make sure he could plan every one of his opponent’s moves before he himself decided what to do. Afterwards, he would often sleep twenty hours to recuperate. He used up more energy planning than he did fighting.

He told me fighting was a relief to him. Planning was torture.

I’m sure that most of the cities’ names have been changed since I was in Iran. My journalist instincts made me ask for names and explanations everywhere we went. Sometimes they were hard to understand. A place could be named after a tribe or the tribe’s chief, or it could be the name of the river it was on, or a landmark, or even something that had happened there, as the place called, “Orian’s Big Trip”. I inquired after that name. Orian was a man who’d stumbled on a rock, and fallen off the cliff overlooking the village. Nearly all the villages we passed were named after the Caspian Sea. We passed through (rough translations) three “Lake-views,” five “Lake-sides,” one “Saltwater Town,” a “Lots of Fish Place,” (I liked that one) and a “Deep Water, No Wading”. It seemed the smaller the village, the more picturesque the name.

Plexis was bucked off his new horse, and his arm got worse. I was worried, but Usse wasn’t. He told me that two weeks’ rest would help put things right, and so when we got to Zadracarta I made Alexander forbid Plexis to ride.

Plexis took a great interest in my education, and he would often sit with Callisthenes while he gave me my lessons. He and Callisthenes would usually end up in a lively discussion about philosophy, literature or science. Alexander would join in if he had finished working, and I would take Callisthenes’s harp and try to play a few of the songs I knew on it.

They were all impressed by rock music; it sounded like great incantations to them, and they thought I was talking directly to the gods.

Callisthenes had a remarkable voice, so I taught him some of the songs I knew, and we would sing harmony for Alexander. He loved music; it brought tears to his eyes. He would insist on singing along, which brought tears to our eyes; I have never heard anyone with a worse singing voice.

Autumn was coming, the autumn of 330 BC. We headed due east and arrived in Arie, a large country in what is known now as Turkmenistan. Here Alexander founded another great city, Alexandria Arian, or Alexandropolis, as it was also called.

When he founded a city, he made the city completely independent; that is to say, it had its own government and didn’t have anything to do with the surrounding kingdoms. Alexander left Macedonians in charge most of the time, promoting them to governor, and giving them the freedom to control the city and the immediate countryside. The result of this maneuver was threefold. First, it meant that the cities would not be swallowed up in the local customs; on the contrary, they would be islands of pure Greek culture, where schools were set up and artists and poets would express themselves in what would be known as Hellenistic art. Secondly, these cities would be democracies, able to decide their own governments, separating them from the satraps who ruled the great expanses of land around them. Thirdly, this meant that after Alexander’s death, when his kingdom splintered into many different parts, these cities stayed exactly as he’d planned. They continued to be landmarks of Greek culture, inspirational landmarks that would continue to thrive centuries later. They would carry forward the legend of Alexander.

Book One in the series, The Road to Alexander is the first to be remastered and reissued digitally worldwide is OUT TODAY, via Accent Press. Available for order NOW: (US) (UK) 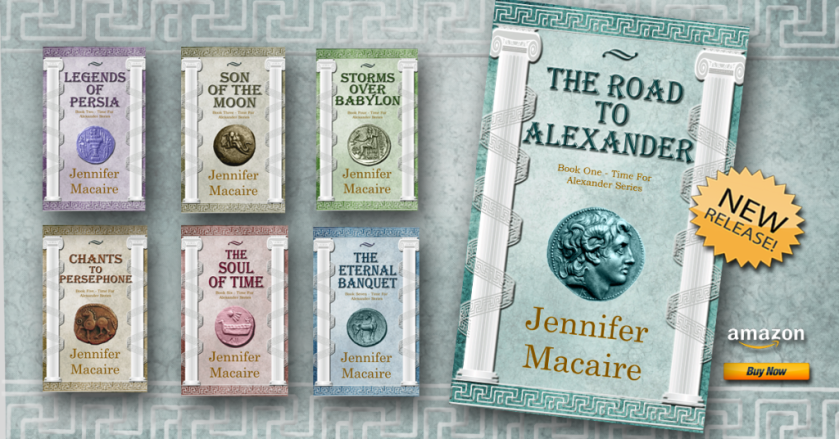 Jennifer Macaire is an American living in Paris. She likes to read, eat chocolate, and plays a mean game of golf. She grew up in upstate New York, Samoa, and the Virgin Islands. She graduated from St Peter and Paul High School in St Thomas and moved to NYC where she modeled for five years for Elite. She went to France and met her husband at the polo club. All that is true. But she mostly likes to make up stories. Her short stories have been published by Three Rivers Press, Nothing But Red, The Bear Deluxe, and The Vestal Review, among others. One of her short stories was nominated for the Push Cart Prize (Honey on Your Skin) and is now being made into a film. Her short story ‘There be Gheckos’ won the Harper Collins /3 AM flash fiction prize.